We create the earthquake

Twenty-two long years after the galvanizing World Conference on Women in Beijing, the US government took a tremendous step forward. The Women, Peace, and Security Act is now the law of the land.

The bill calls for the systemic, serious involvement of women as decision-makers on matters of war and peace. Parts of the US government that play a role in making that happen must report to Congress regularly on their progress.

To mark this milestone, many of us veterans in the field were gathered recently by the UN Foundation. That organization was the fitting host, since many of us were active “back when” the UN Security Council Resolution 1325 was passed. “1325” quickly became our short-hand for picking the patriarchal lock that allowed only men to be at negotiating tables, trying to reach a peace agreement to stop a bloody war. 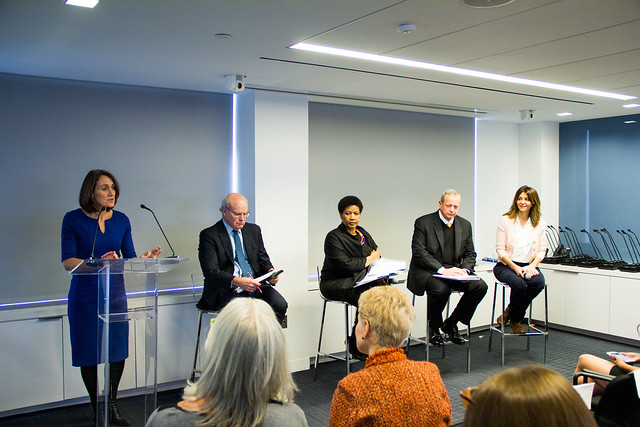 On this occasion, I spent several hours in celebration and conversation with others who have toiled to the bone in these vineyards for so long:

Welcoming us from the podium was Amb. Elizabeth Cousens, Rhodes Scholar diplomat with a dozen key UN roles to her name.

As an old-timer in the field, I followed, extending heartful thanks and predictable prodding to the invitation-only audience who packed the room.

Retired US Marine Corps four-star general John Allen (now President of Brookings), expounded, as he has for years, on the difference having women troops makes in the life and death arenas of Iraq and Afghanistan;

Honey al-Sayed gave us real-life application of the theory. Her Syrian radio program was influential enough that she was forced into exile to save her life; she created the Media and Arts for Peace Initiative with the Geneva Center for Security Policy.

Phumzile Mlambo-Ngcuka, with a ladder of career rungs that includes Deputy President of South Africa, is now dual-hatted as UN Under-Secretary-General and Executive Director of UN Women. Her comments provoked me in the best sense of the word—calling us to lean forward into action:

The capacity for us to make a significant difference and scale our efforts exists now. Sometimes we miss the opportunity to intensify our action around one issue. An advantage we now have is the UN’s Sustainable Development Goals: a platform to do the same things across many countries and break the pillars of patriarchy in a significant way.

My child once said to me, “Mama, if all the people in a country jump at the same time, there will be an earthquake?” Let’s choose the issues we’re all going to work on in a dedicated way, and bring along member states all at the same time. We create the earthquake, and the pillars crumble.

Many of us had become resigned that it would “take an act of Congress” to break through the walls of a security tradition that have kept out the wisdom of women, (Note: building a wall is not a new idea in American foreign policy.) With a nod to my faith upbringing, what a joy to be part of the celebration as the pillars have crumbled. The walls are indeed tumbling down.

Watch the Video In the Media