The adventures of a chronic activist, philanthropist, scholar, artist, and internationalist.

A Milestone for Global Security

From a winding calf path to a superhighway… We celebrated the 15th anniversary of an essential UN resolution (1325) declaring that women had to be significantly involved in decisions of war and peace. We built our Inclusive Security program around that idea. Our policy forum to mark this progress brought together 14 extraordinary women leaders from around the globe, inspiring several hundred US military and public policy figures. Almost 100 leaders of partisan and non-partisan organizations promoting women’s high-level political leadership have gathered regularly since 2009 under our auspices. Add the “Unconventional Women” whom we’ve hosted at political conventions of both major parties.

Confronted with the sex trafficking of girls across Europe after the fall of communism, I was determined to do whatever I could to stop the commodification of women’s bodies. Looking around the world at ways to deal with the explosion of organized crime prostitution, we decided the most effective approach was to stop the "johns." Men can’t keep hiding behind “boys will be boys.” This is edgy work, convening law enforcement, female survivors, political figures, tech experts, and others. Men were the primary supporters of Susan B. Anthony’s suffrage movement, says my sister Helen: now, rise up women! (We co-founded Women Moving Millions, a global contagion of women making unprecedented gifts of $1 million or more for the advancement of women and girls.) 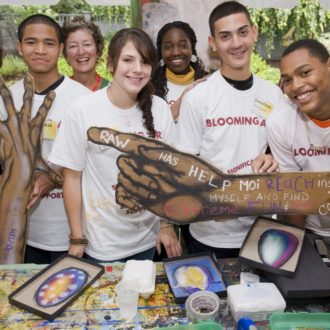 Founder, Women Waging Peace and the Institute for Inclusive Security

On the strong hunch that women are an untapped resource in preventing and stopping war, we brought more than a hundred leaders to Harvard to exchange their strategies with as many policy makers and a host of researchers. That meeting has spawned a whole movement, bringing Joseph Nye’s doctrine of “soft power” to bear in stopping deadly conflict. My four-year tenure in Vienna was a success: to Austrians, I was a “refreshing American.” I had a weekly newspaper column and a monthly radio spot. In a shocking departure from protocol, top officials and cab drivers called me “Swanee.”

While I fulfilled my diplomatic duties representing U.S. interests to Austria and its people, they fully appreciated that I was driven day and night to stop a horrific war as Yugoslavia, Austria's neighbor, fell apart. I settled (as much as I settle) in Denver; our home was a hub of theological thought and social justice activism. My public involvement increased, even as I raised a family and earned a second master’s and a doctorate (Iliff School of Theology). I threw myself into initiatives focused on marginalized members of the community. Meanwhile, I found an enduring spiritual retreat at my ranch in the Kenosha Mountains, and my children became not just dear hassles but also a deep joy. Around 1961, we posed as the perfect family on the porch of Mt. Vernon, our family home. And I still wear Western hats! We called ourselves “The Lively Ones,” even when I was sobbing my heart out because the banjo player wasn’t in love with me.

Born and raised in Dallas, with hot summers in Idabel, Oklahoma Helen and I sang and curtsied every night to fancy dinner guests. Staring straight ahead, while Mom, Helen, June, and Ray followed the photographer’s instructions.

Swanee Hunt is President of Hunt Alternatives, which for more than three decades has advanced innovative and systemic approaches to social change at local, national, and global levels. Her work related to combating the demand for illegal purchased sex (including trafficking) and promoting the full inclusion of women leaders in international security processes spans more than sixty countries.

From 1993 to 1997, Dr. Hunt served as President Clinton’s ambassador to Austria, where she hosted negotiations and international symposia focused on the warring Balkan states, which had descended into bloodshed and destruction.  At Harvard’s Kennedy School of Government, she is the Eleanor Roosevelt Lecturer in Public Policy, founder of the Women and Public Policy Program (a research center she directed for a decade), core faculty at the Center for Public Leadership, and senior adviser at the Carr Center for Human Rights. She holds two masters degrees, a doctorate in theology, and six honorary degrees.

Ambassador Hunt has been a syndicated columnist and authored articles for Foreign Affairs, Foreign Policy Magazine, New York Times, L.A. Times, International Herald Tribune, et al. Her first book, This Was Not Our War: Bosnian Women Reclaiming the Peace, won the 2005 PEN/New England Award for non-fiction. She has also authored Half-Life of a Zealot, Worlds Apart: Bosnian Lessons for Global Security and Rwandan Women Rising (2017, analyzing how women became an effective 64% of the parliament, half the supreme court, and half the president’s cabinet).

Swanee Hunt summited Kilimanjaro with two new knees, for which she reserves bragging rights for decades to come. A photographer (six one-woman shows) and composer (“The Witness Cantata”), she was married for 25 years to international conductor and impresario Charles Ansbacher. Her world includes their three children, plus a menagerie of cat, parrot, horses, bison, and grandchildren.