I was recently a guest on Farhat Asif’s show (from Pakistan) about the personal lives and professional careers of women leaders. An award-winning diplomat and human rights activist, she asked me to speak conversationally about my experiences to inspire an audience that spans the globe. What I didn’t realize was the extent to which I was the one who would be inspired.

More than a decade ago, as a doctoral student, Dr. Asif came to DC as a member of our Inclusive Security network. That institute’s Pakistani coalition promoted understanding of and support for women’s roles in countering violent extremism. Here we are in 2012 at the State Department (from which I was almost evicted for taking this picture), meeting with then Secretary of State Hillary Clinton during a delegation visit to Washington, DC. 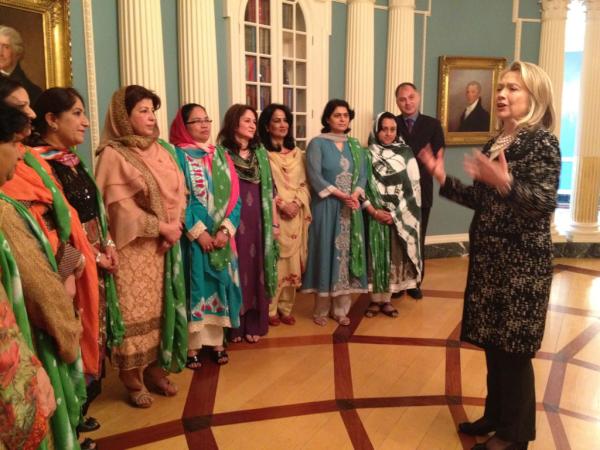 Standing on the far right (in a green and white wrap), Farhat described her dream of an institute in Islamabad modeled on Inclusive Security. Today, she’s the founder and president of the Institute of Peace and Diplomatic Studies, which she calls Pakistan’s first “think and do-tank.” She and her team blend different ways of changing the world—partly describing brilliant acts of courage, partly pressuring public officials, partly using airwaves for calls to action, to advance women’s essential roles in stopping war.

In case you missed it, you can watch our conversation here.